Some observations made during a peregrination from the borders of Somerset in Yeovil, to Cerne Abbas in Dorset.

was ‘the Baptist’ telling us….

River Jordan,
Muddy and Wide
Milk and Honey
On the other side

There was no great river Jordan but there was mud.

Not much milk, no honey,
….. but good friendly hospitality from friends who carried kindly baggage (despite their having to do the same in larger form as they moved house) & who received fed and greeted.

The first night, prior to the walk, was spent in Yeovil at the Pen Mill Hotel 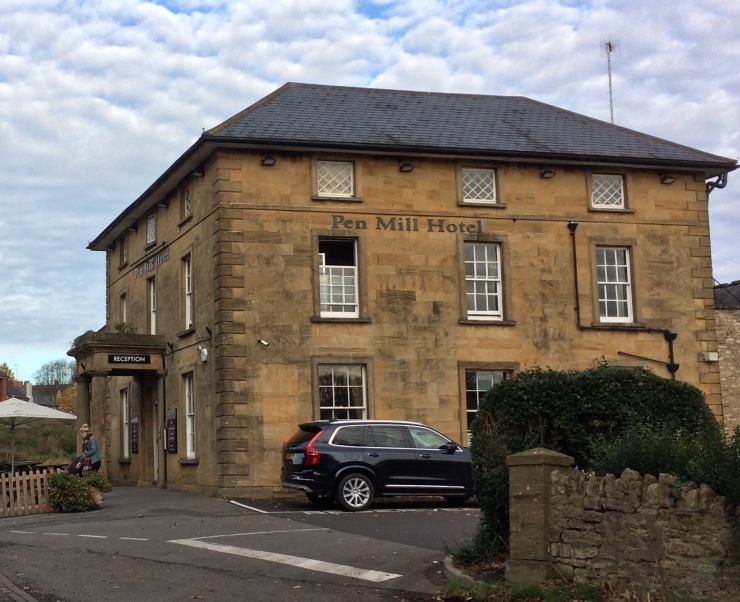 and before retiring the two pilgrims managed a stroll around Yeovil 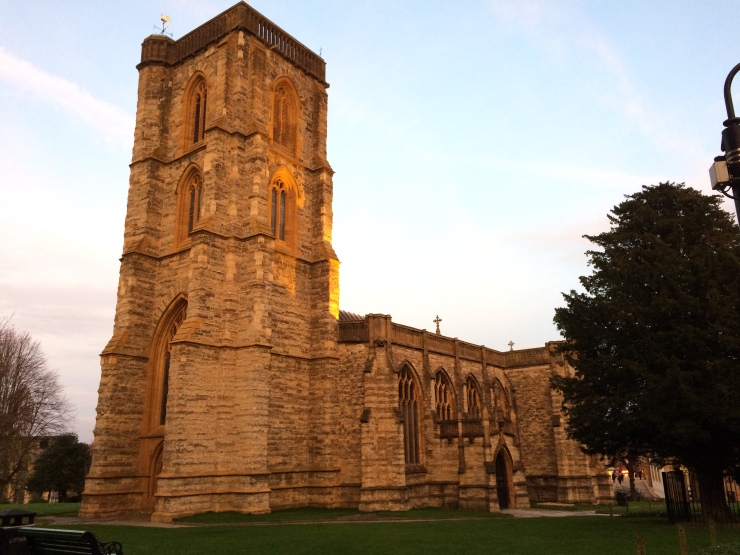 noting curiosities both outside and in

…hiding an elephant in the room 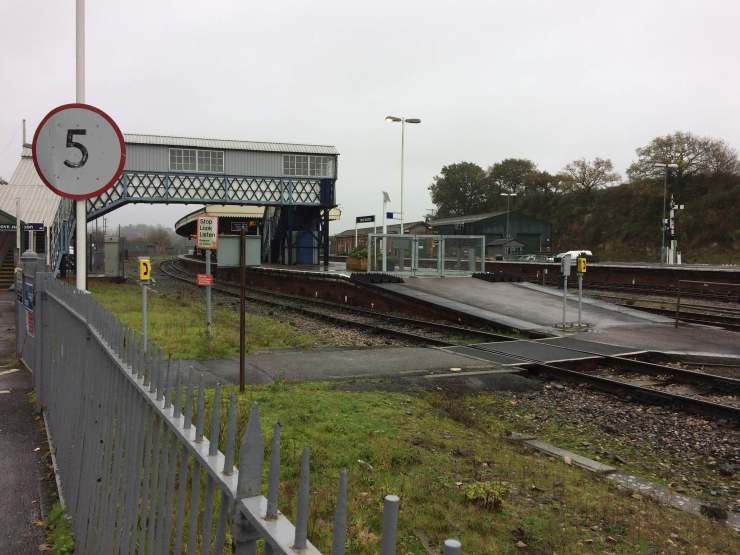 At some point, not easily discerned, whilst passing under, or just beyond the railway line, the traveller crosses the boundary between Somerset & Dorset.

The trail into Dorset was initially pleasant…..

but soon became less easy as rain increased and ‘the ways became foul’.

– an excellent supplement to grass silage (the bales in the picture lie ready for use)
– suited to light & medium bodied, free draining soils.
– good for filling gaps in the forage cycle
– highly digestible, energy-rich

and according to this walker, after struggling through such a crop:
– a mud inducing, leg soaking, energy sapping obstruction

These plants are the same as sometimes referred to as Mangelwurzle and featured in the locality through which the route passed, in the late October celebration of Punkie Night

The travellers did not test the claim that the plant was ‘highly digestible & energy rich’.

Crossing wet & muddy landscapes is not easy and can be marked with a range of obstructions. Fortunately, in recent years, local authorities have improved stiles and restored bridges

… and the slow journey away through hedges and briars sometimes reveals curiosities who origin and purpose, though clearly of ‘modern’ construction, remain mysterious. 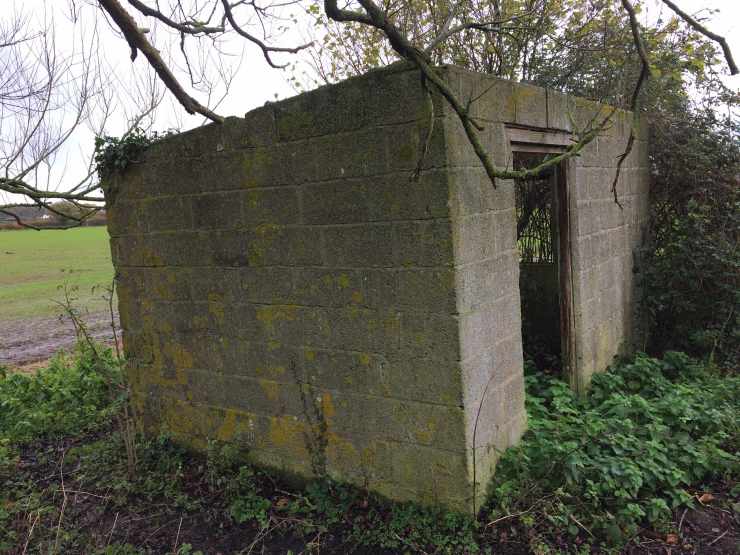 Other curiosities, along  roads, may be capable of viewing but are rarely observed: 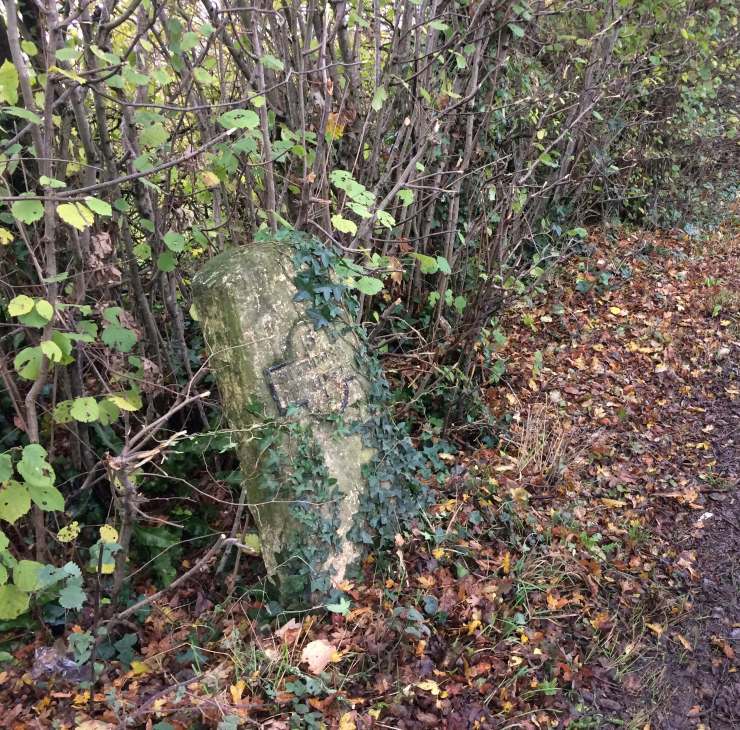 The above on the road approaching Yetminster a place where lack of caution could have unfortunate results: 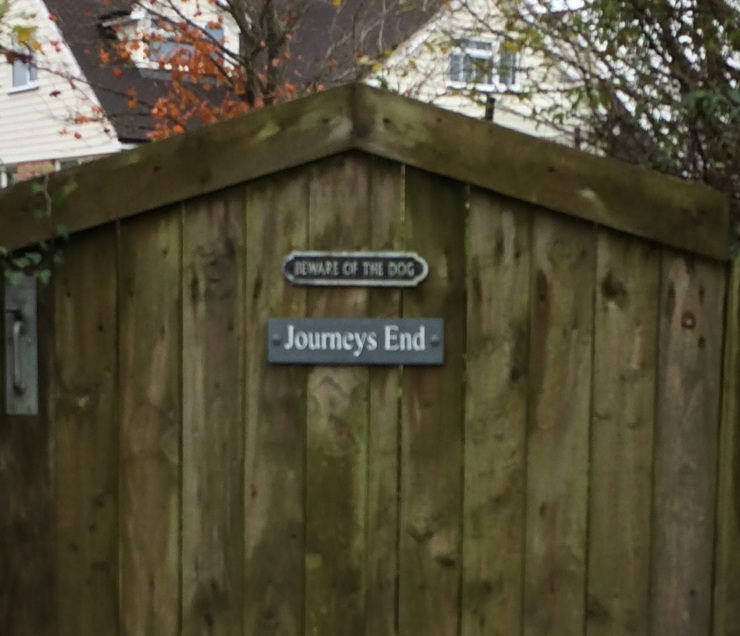 and at the crossroads…. some of the wonderful sounding names of the area. 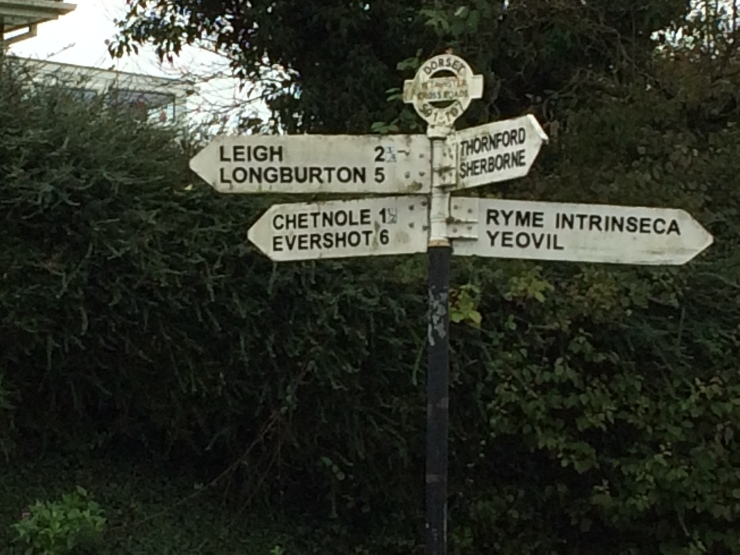 The slow walked journey does not allow for diversions but it allows for encounters en route…. sometimes with people, sometimes with places. In Yetminster that included the parish church. 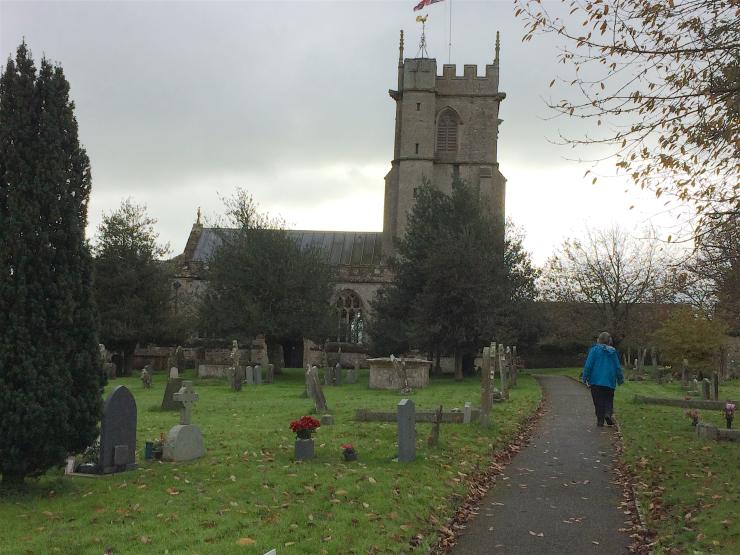 Regardless of their use as places of religious worship (but maybe because of such a function) they become places that carry and deliver (to the visitor) some sense of the local story.

The gravestones often have details and the interiors almost always contain curiosities. 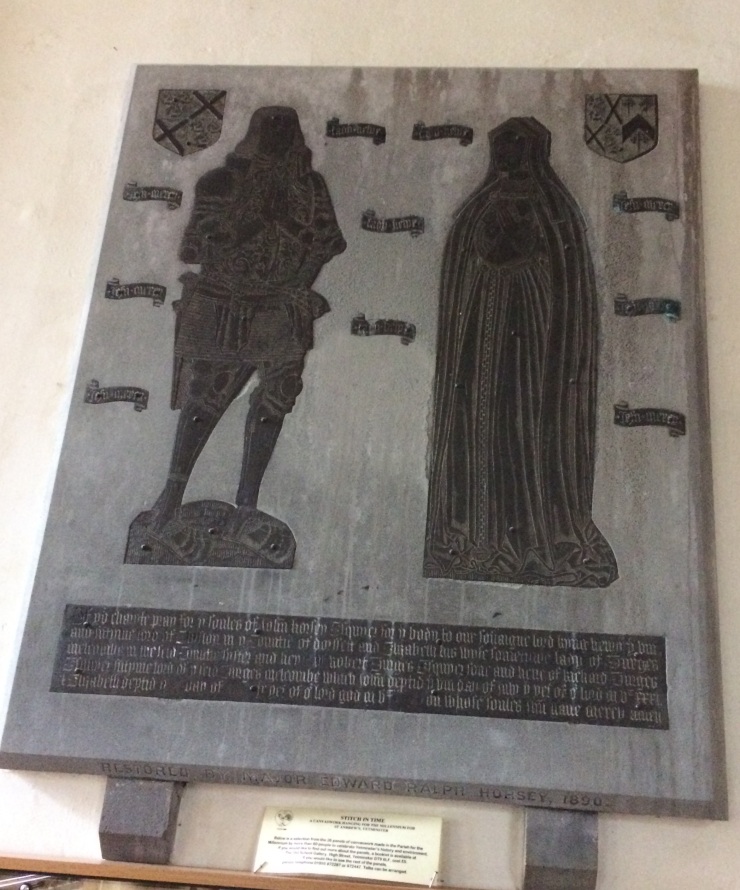 Though not necessarily explained (the notice underneath was about sewing!)

The figures are described as:
“In S. aisle—on S. wall, to John Horsey, 1531, and Elizabeth (Turges), his wife, figures of man in enriched armour and woman with pedimental head-dress, ten scrolls and two shields-of-arms, (a) Horsey quartering Malbank and (b) the same impaling Turges.”

The brass (which does not have a date for the death of Elizabeth) became the subject of a gloomy poem, ‘The Inscription’ by Thomas Hardy:

And, as talebearers tell, thence on to her last-taken breath
Was unseen, save as wraith that in front of the brass made moan;
So that ever the way of her life and the time of her death
Remained unknown.

The couple were parents of Sir John Horsey who managed to ‘buy’ Sherborne Abbey at the time of the Monastic Dissolution. He was also the one who sold Longleat to a Johne Thynne of Church Stretton, Shropshire – whose descendants, at a much later date introduced lions to the estate.

And thus the local stories become woven into the national.

The church contains other ‘treasures’ – part of a Saxon Cross…. 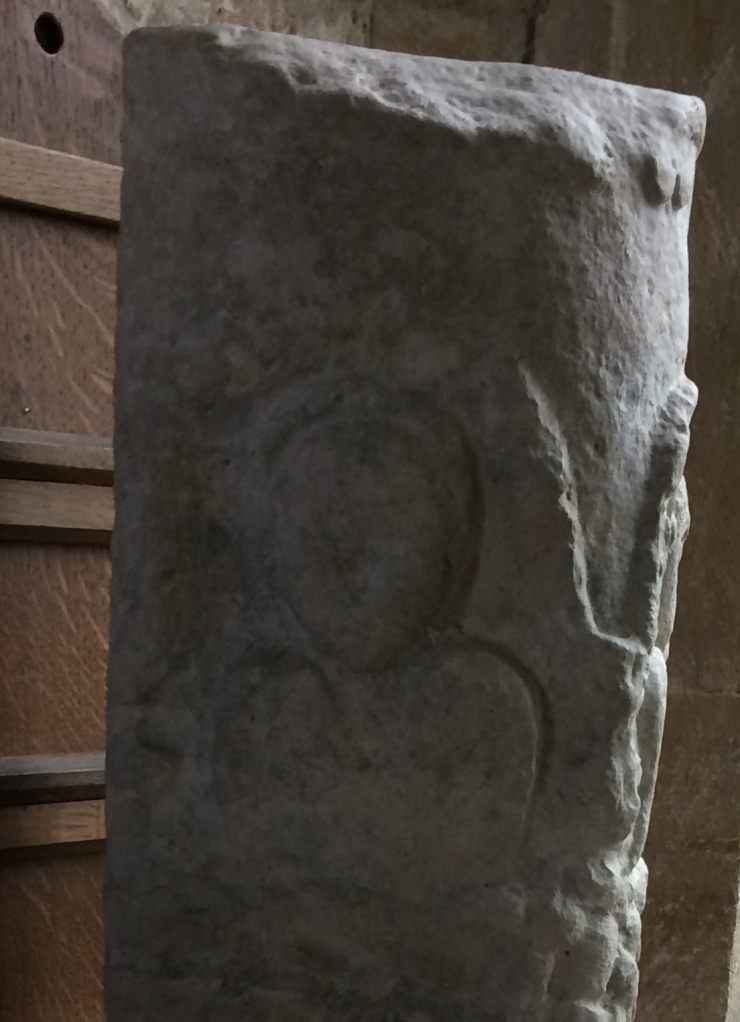 A monument to Bridgett (Browne), wife of John Minterne, 1649 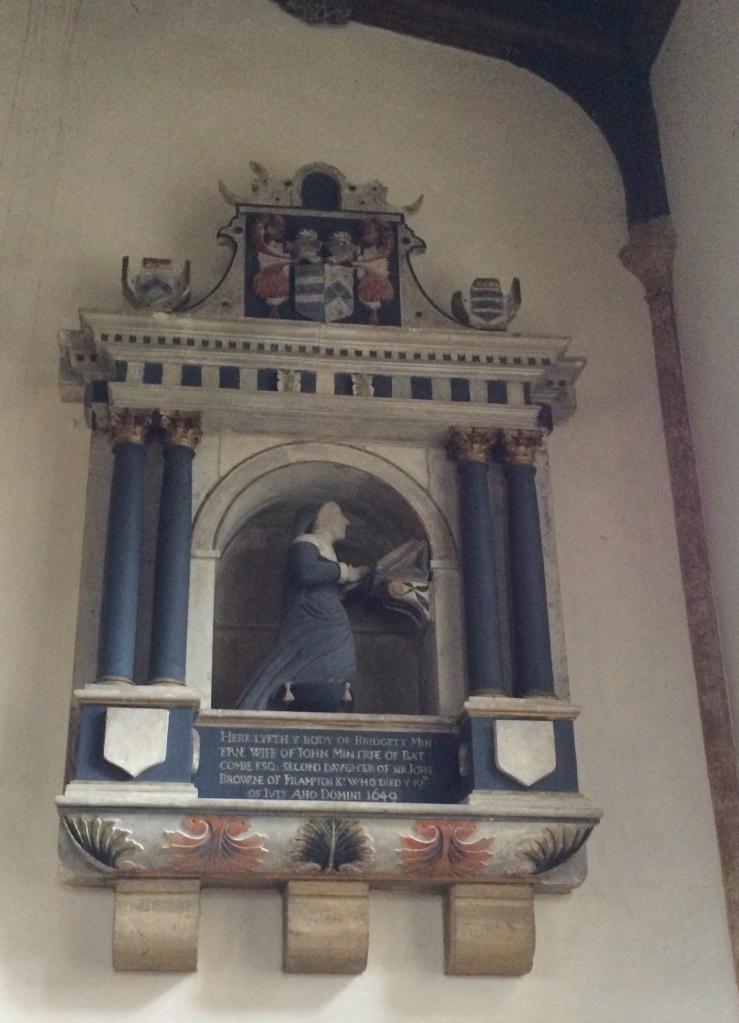 and on the capitals of pillars, carvings which included one of a goose (‘the gullible”) hanging a fox (crafty and deceitful & frequently wearing clothes of religious ‘preaching orders’)

The ‘hanging tree’ is a horizontal bar held between two forked supports & the goose is pulling the rope to which the fox is attached.

The visit coincided with the Remembrance weekend as the lectern frontal suggests.

The ‘collective weave’ of the place carries a story from (probably) the C9th to the C20th
One building, free of entry, capable of opening up a vast collection of tradition and story covering a whole range of European history.

The journey, now in the rain, continued, through ‘Hamlet’

Dorset is one of those counties possessed of a vast range of curiously named villages – so one so simple as this – and exact description – is strange.

So, the travellers plodded on, wearied by mud and rain…. now heading further into the valley of the Wriggle

“The undiscover’d country from whose bourn
No traveller returns, puzzles the will
And makes us rather bear those ills we have
Than fly to others that we know not of?”

(‘The Tragical History of Hamlet……’ by WS)

Not exactly ‘flying’, but nonetheless, hurrying, desirous of reaching a place we ‘know not off’ but from the map, are certainly aware…. and there was no disappointment.

Warm, welcoming – and essentially: ‘dry’ – it provided good food and beer and interesting conversations with other visitors. 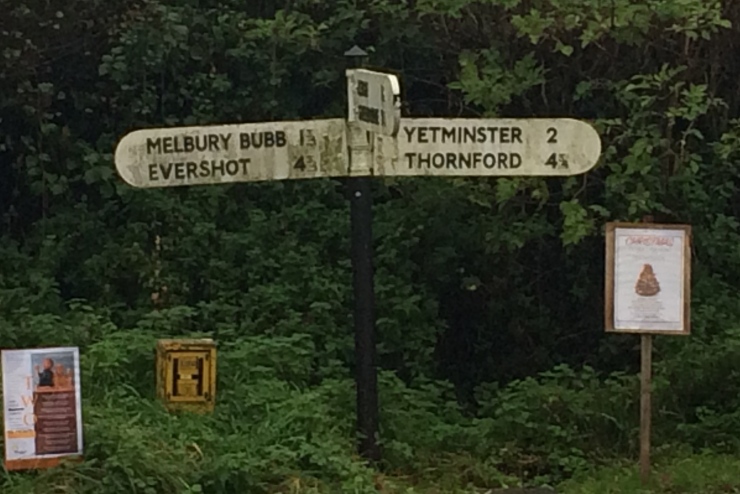 Names, names, names – and of course ‘Melbury Bubb’ has to be the almost perfect example of a Thomas Hardy invention … except that is real.

John Betjeman was similarly caught with the whole ‘sound’ of the county:

All somewhat excessively (& unrealistically) romantic, even for Betjeman’s time. Though the Whist Drive Culture as an essential of rural fund-raising efforts  seems (at least in Mid Wales) to have faded but survives.

I guess such gatherings are now replaced by local “XX’s Got Talent” with social evenings that demonstrate the total inaccuracy of the claim.

Chetnole Parish Church contains a classic example of the writing produced by a romantically inclined (& probably recent) inhabitant of such places.

As much as churches contain elements of the interwoven historical story, they are also places in which, through the ages, individuals have been allowed to express their opinions (traditionally these are on memorial tablets outlining the worth of a deceased person).
Now that churches wish to provide ‘information’ to visitors, other individuals are permitted to ‘add comment’ – and often views are expressed in strong (‘trenchant’) terms

a form of mild aspirationalism towards a receding past that probably ‘never was’. 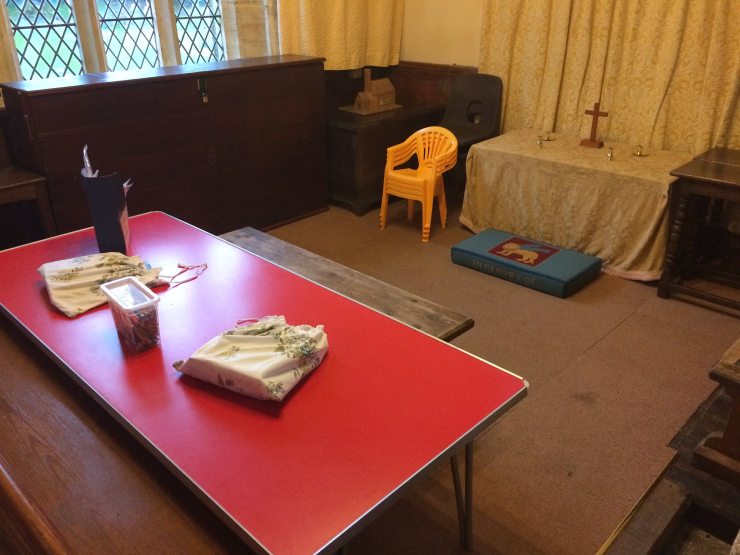 Is it a truly ‘dedicated’ altar or just a ‘substitute’?

Do adults stand, seemingly gigantically tall, as the rituals are performed?

And in the parish church, the travellers slept (very well). Not surprising as the Parish profile highlights:

This is a progressive village and the church is seen by everyone, even non – church goers, as central to village life.

The Remembrance Sunday muffled peal accompanied the travellers as they left Leigh.

‘The sides have remains of figures in low relief set under flat canopies, but on one face the carving has been tooled away; one figure is probably St. George and the dragon, a second is of a man in a short tunic.’

The minor roads leading up and away from Leigh have a ‘drove-like’ quality, which is presumably what they were…. constructed to lead to higher open hill ‘sheepwalks’. Leigh is situated on a shelve of land, above the lower river levels but below the higher pastures. The word comes from the Middle English ‘cleared ground’.

The feel of the walk from Leigh seemed to confirm such supposition. It led past Pogels Wood – a community Forest school:

Beyond the wood the land gained a sense of height (and comparative remoteness) eventually ascending to ‘Hilfield’ – the slope set well above the valley, yet still, beneath a scarp.

There is a significant religious community based at Hilfield.

…… of no great age but environmentally satisfying and containing some pleasant carvings:

Opinions differ as to the origins of these benched carvings. They were restored in the 1950s and may well be the effort of C19th century antiquarianism

Arthur Mee (The King’s England: Dorset 1939), was charmed (as he almost invariably was):

‘This hamlet, green and peaceful in the shelter of High Stay, is a little difficult to find [not if one is walking], but is well worth finding, for every pew in its tiny church has magnificent carving’

Beyond the church and in the lee of the hill ridge, is the Anglican Franciscan Friary of Hilfield.

“Franciscan brothers first arrived here in 1921 to establish a home of refuge and rehabilitation for the large number of displaced men who were then tramping the roads of rural England……..

….People of all backgrounds are welcome here – Christians, those of other faiths and of none – for rest, retreat, and renewal of life.

The road from Hilfield climbs steeply up a scarp, onto the Dorset Downs and Telegraph Hill.

From the ridge the north westerly view was to The Mendips & beyond to the hills of South Wales. The Cotswolds were also faintly outlined. 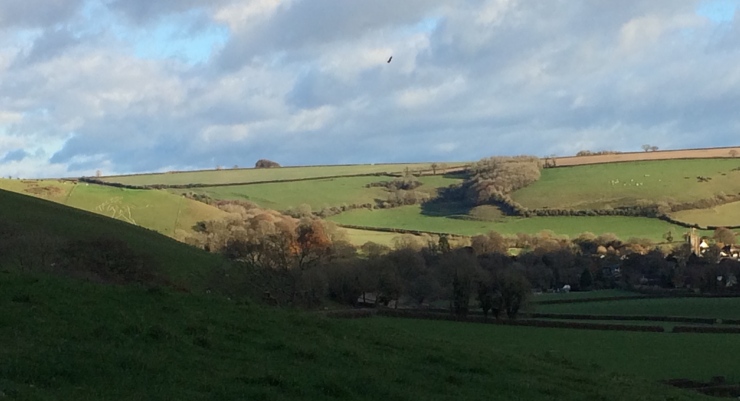 The destination in Cerne Abbas was The Augustine Holy Well, where the peregrination concluded by taking the waters.

“All in all a very rich site for legends and folklore. A few moments here has a peaceful nature to it and to be highly recommended…after all it even has a seat.”

The parish church contains a recent example of the inspirational value of the ‘Austin Well’.

The well features in a new icon placed in the parish church & specially commissioned to commemorate the life of Alice Still of Cerne Abbas.