‘Peregrinations from Here to There’

Activities that began in 1976 and from which grew

For precise route, see detailed maps at the bottom of this page

Whan that Aprill with his shoures sote
The droghte of Marche hath perced to the rote,
And bathed euery veyne in swich licour,…
…….Than longen folk to goon on pilgrimages, 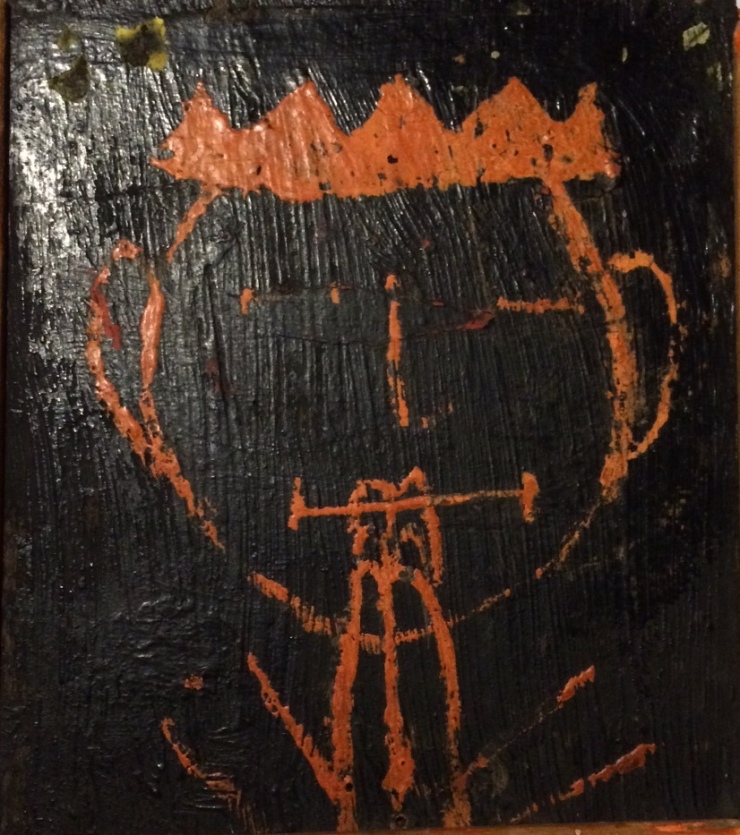 The pilgrimage celebrated the 40th anniversary of a walking pilgrimage tradition started when 90 local school students & parents & friends, as part of the 1300th anniversary celebrations of Hereford Diocese, walked from Bishop’s Castle to Hereford Cathedral. This began a tradition which has since created approx 60 similar pilgrimages. The link is to an indicative map outlining most of the pilgrimages.

In 1976 at the suggestion of a retired Bishop of Worcester (Mervyn Charles-Edwards) a group was assembled at Bishop’s Castle County High School (as it then was) and along with various others gathered en route, the group of students (approximately 95, we never knew the exact number) and adults made their way to Hereford to be greeted at the boundary of the old city by the mayor & ‘a man with a cat on his head’ (as one person put it – the ‘cat’ still survives) and by the Bishop of Hereford at the Cathedral.
There was a mild chaos as we approached Hereford and the Civic reception.
The younger members of the group (being somewhat obsessed with football teams – a favourite was Leeds United!!) had already terrified certain young citizens with the the warlike quality of their chants (‘we’re going to eat you’ caused panic to some smaller resident children outside the Mother’s Pride Bakery). All survived and the pilgrimage arrived safely.
The pilgrimage was, for the Cathedral anniversary celebrations, second only to the Royal Maundy 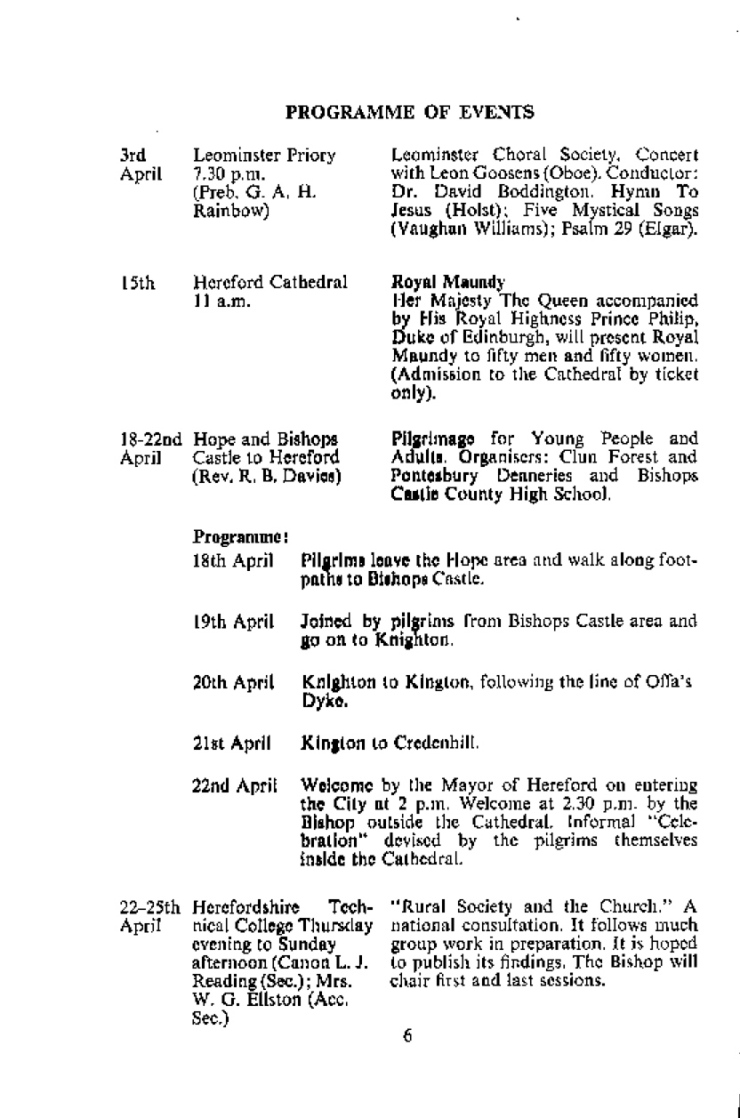 Relics were collected (egg shells, talcum powder, bandages), stories of the miraculous St Tambo were recorded and later a reliquary was created which was, at the start of pilgrimage 2 in 1977,  blessed by Mervyn Charles-Edwards. These items still exist – stored safely in an under-stairs cupboard).

The tradition continued each year & developed.

Each pilgrimage became, as a pilgrim in 2003 stated,  ‘temporary travelling communities’. As such they have encompassed most aspects of human existence – pregnancies have been announced (not sure if they’ve been created), marriages both resulted & broken & one pilgrimage was disrupted by the tragic death of a host the day before our arrival. They have also had international participants.
The original idea (exploring, in a practical manner, an aspect of religious practise) has developed into a process of social education, a means of exploring culture, tradition and heritage (built and environmental) & of personal creative artistic expression through the intentional, purposeful, stepped journey. 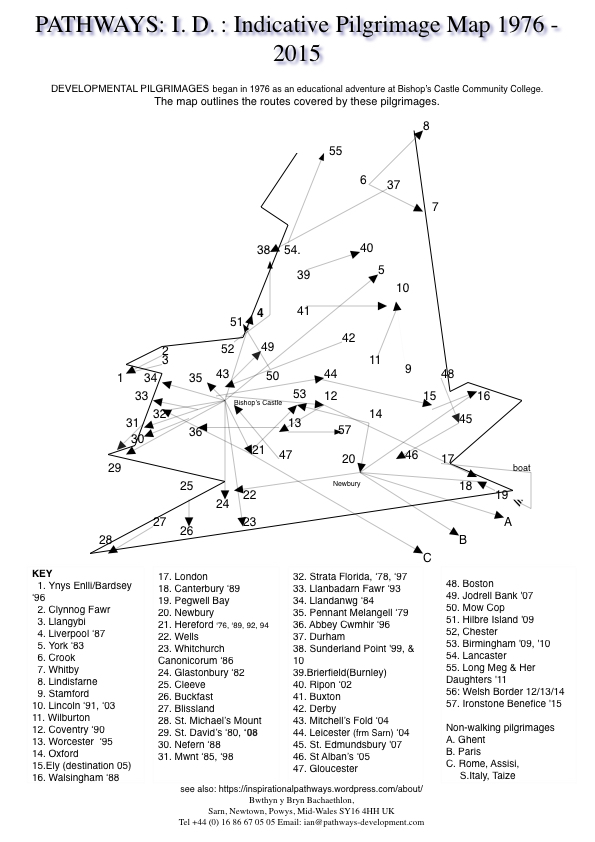 to further the concept of ‘development pilgrimage’ & has in the process of using ‘journeys’ as an educational method, built partnerships across Europe

The use of ‘creative journey’ has also led to international workshops based on the Welsh Border & in 2015 made a contribution to a Language & Culture Summer School for Chinese students at the University of Worcester. The courses are being increased in 2016.
Work using the ‘Creative Journey’ concept is expanding to include
– a contribution to a University degree course on Social Enterprise in North Wales. One which will include developing links with many of Pathway’s partners – especially in Central, Eastern & Southern Europe.
– creating neighbourhood based arboreal avenues & glades that variously encourage reflection and celebration
What began as a suggestion outside what was then Dave Richard’s Hair Salon (Mervyn Charles-Edwards was waiting for his wife) has developed – and will, it seems, continue to do so.

The first pilgrimage created its own stories, & even its own saint – St Tambo.

The ‘acts’ of Saint Tambo were revealed to one of the junior members of the pilgrimage who then charismatically expressed his vision to the whole assembly of pilgrims during an evening at Burghill Primary School (being used as accommodation).

At the end of the pilgrimage the organisers were presented, by students, with a collection items they would, forever, associate with the walk – egg shells, blister pads, talcum powder & scraps of dried toast – all placed in a margarine tub.

Later a reliquary was created and dedicated as being the relics of St Tambo – and blessed by Mervyn Charles-Edwards at the start of the 2nd pilgrimage in 1977.

By further miraculous happenchance they have survived: 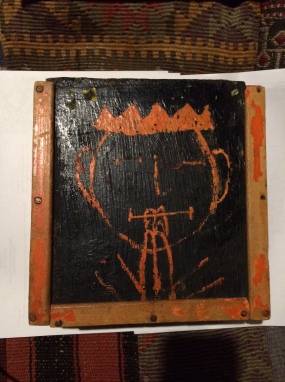 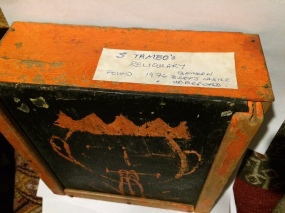 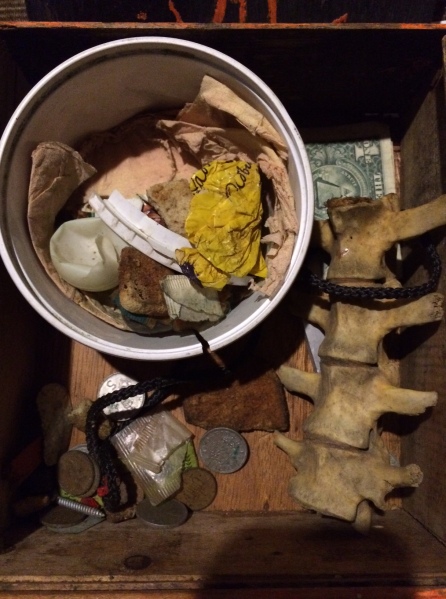 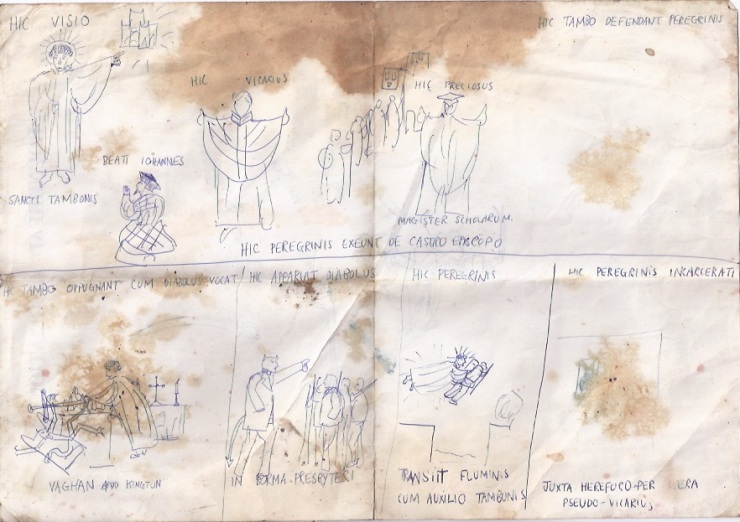 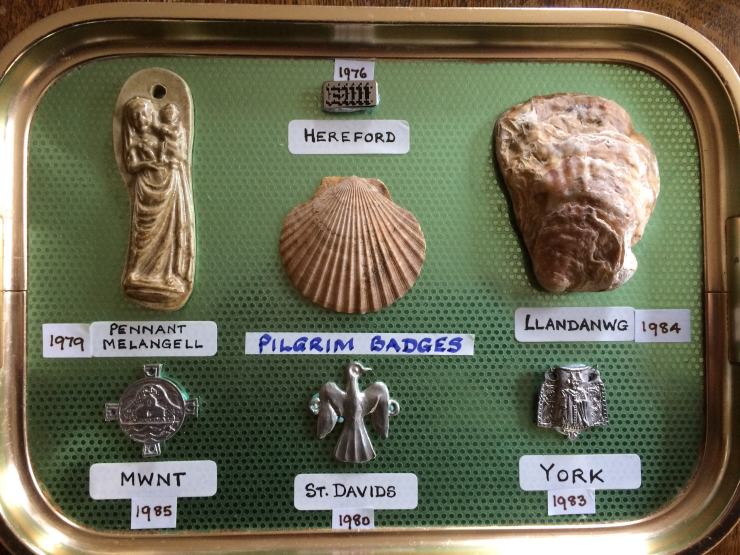 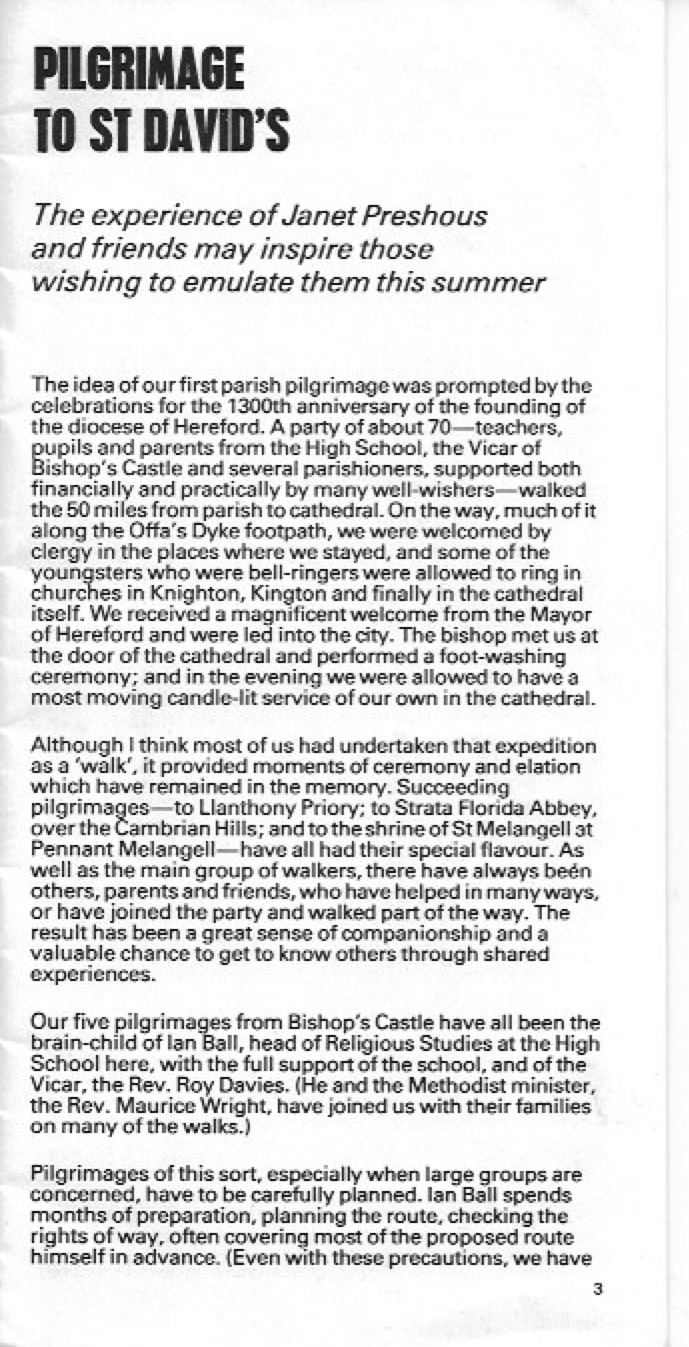 A castle building competition at Aberporth: 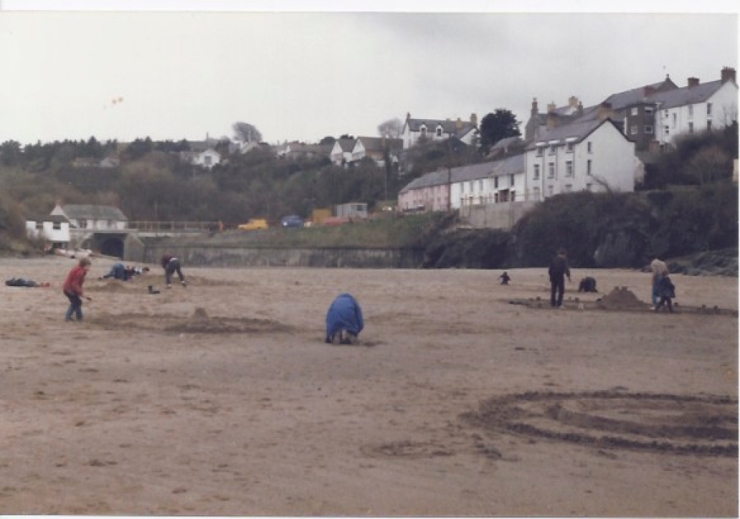 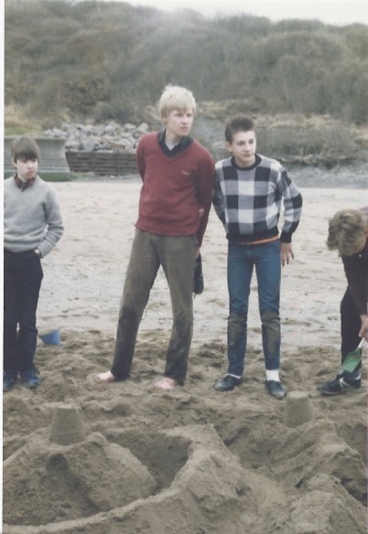 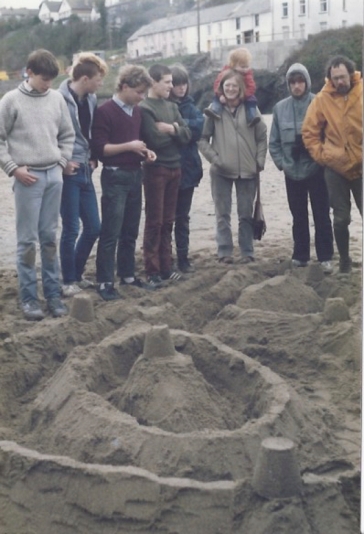 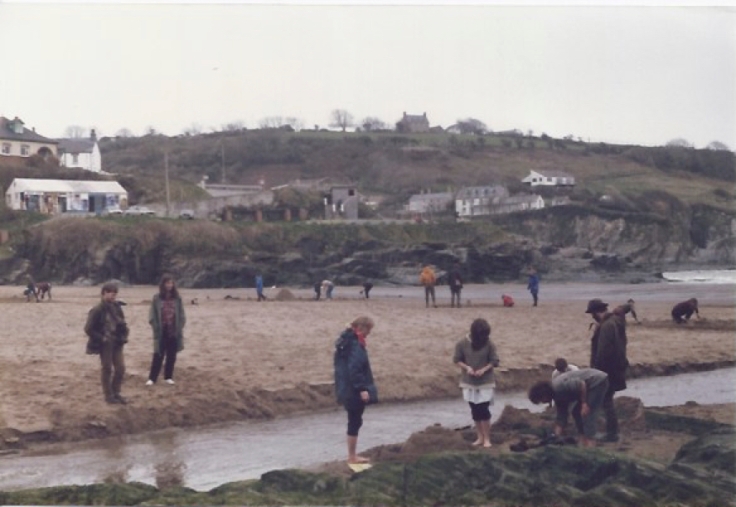 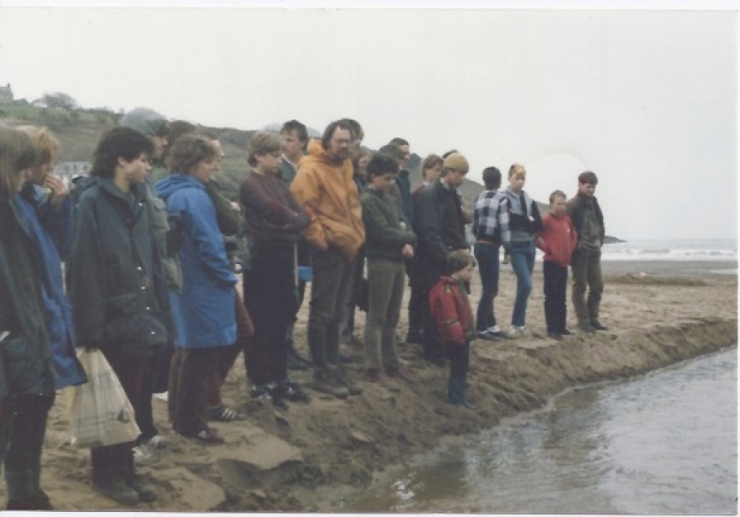 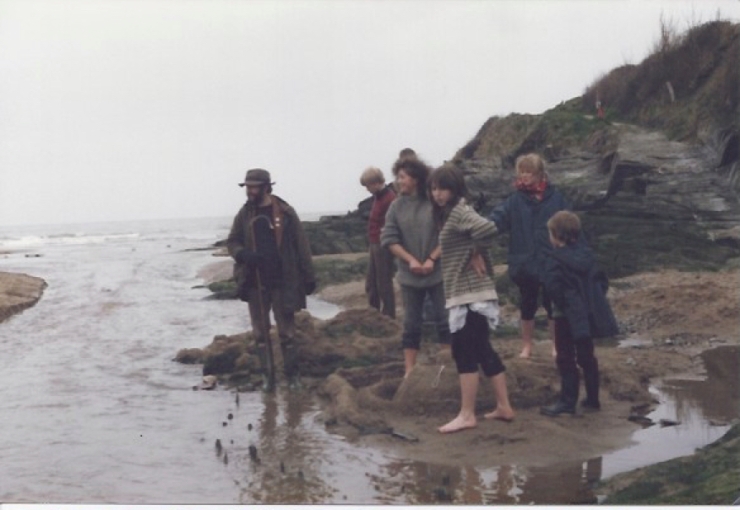 1986: The Tenth Anniversary – and possibly the longest 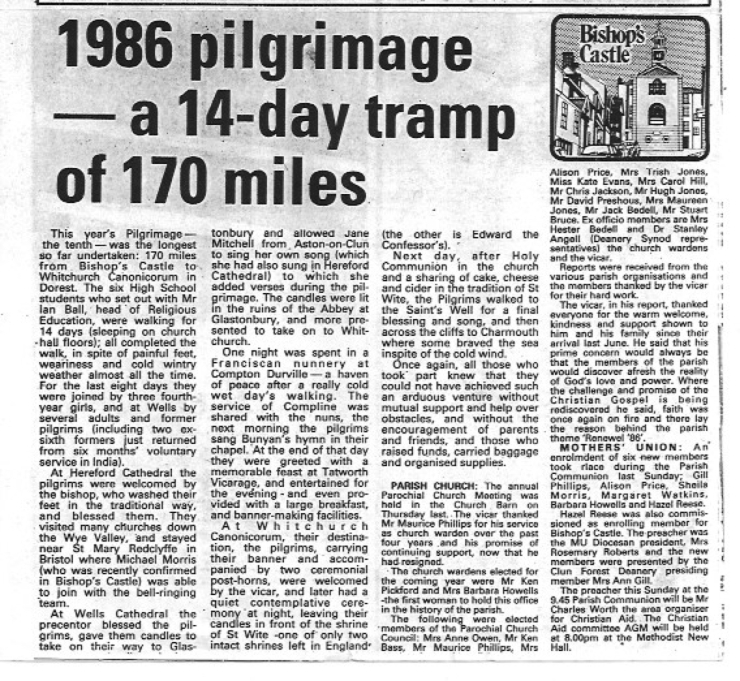 There has been music

There are songs which automatically fit – most famous is Bunyan’s Pilgrim Song from the journey of Christiana in the second part of Pilgrim’s Progress: ‘Who would true valour see’

And one song – adapted in 1986, has been used on many pilgrimages since: commonly known as ‘Wondrous Love’. 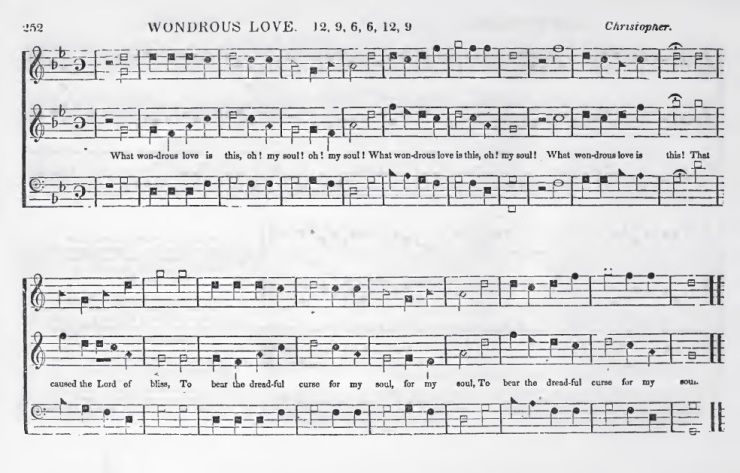 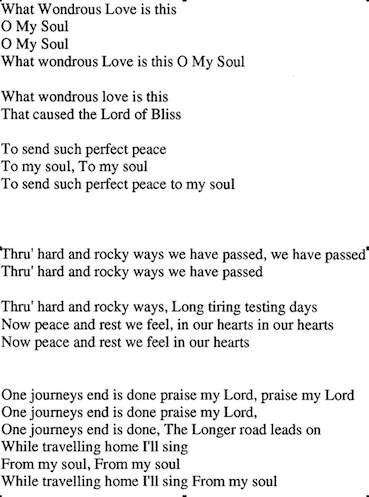 The tune is from a well used  traditional melody and occurs in two nautical songs: Captain Kidd (hanged as a pirate) & Admiral Benbow (an Admiral from the late C17th born in Shrewsbury & possessed of an adventurous spirit that led to his untimely end)

Between 13th & 17th April 2016 a walking pilgrimage from Bishop’s Castle to Hereford commemorated the original walk. 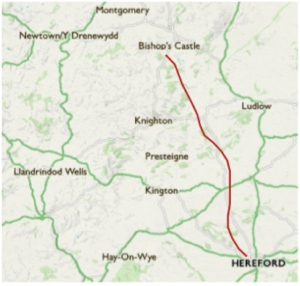 – the important physical variety of the local hills

The final day had a morning walk arriving in Hereford for lunch, followed by Cathedral reception at 14.00

On arrival at Hereford Cathedral the pilgrimage was greeted by the Bishop of Hereford & Cathedral Dean.

The many pilgrimages since 1976 have each created what one pilgrim called a ‘temporary travelling community’. The April pilgrimage had self-catering, overnight accommodation in community halls & Kingsland Parish Church.

The pilgrimage route and daily and sectional distances were arranged to allow time for observe, reflect & absorb the manner in which people have reacted with the landscape. In particular, the way the hills in the northern section merge, through days 2 and 3 into the present intensely cultivated countryside of days 4 & 5. Apples, orchards and cider will be a major feature. 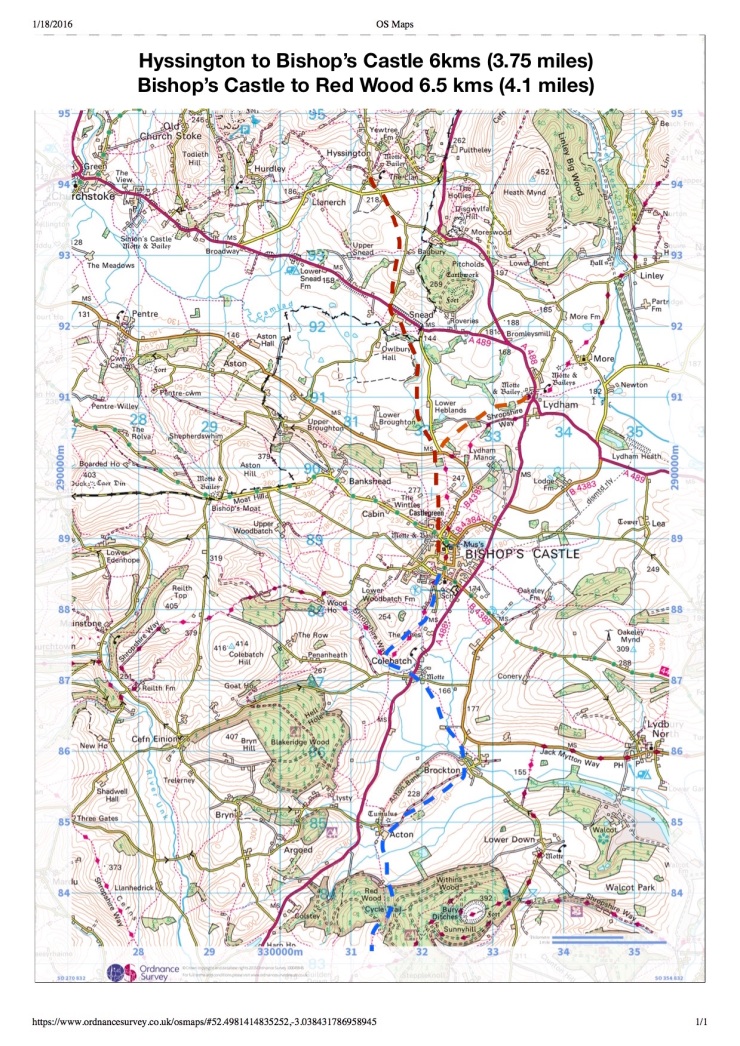 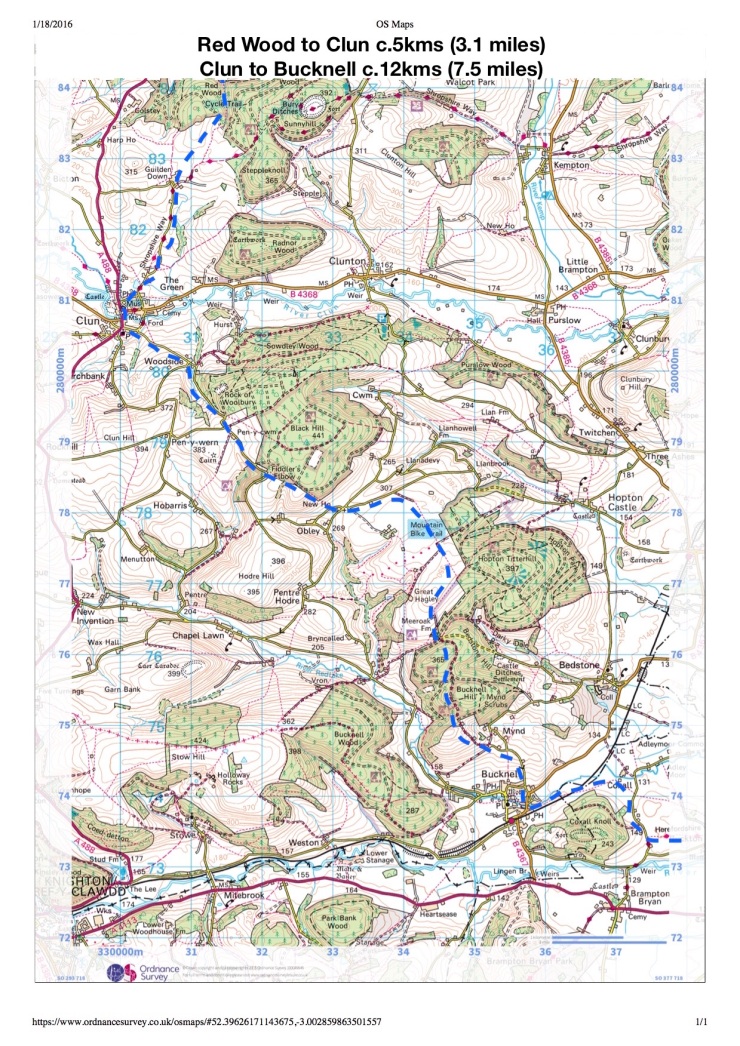 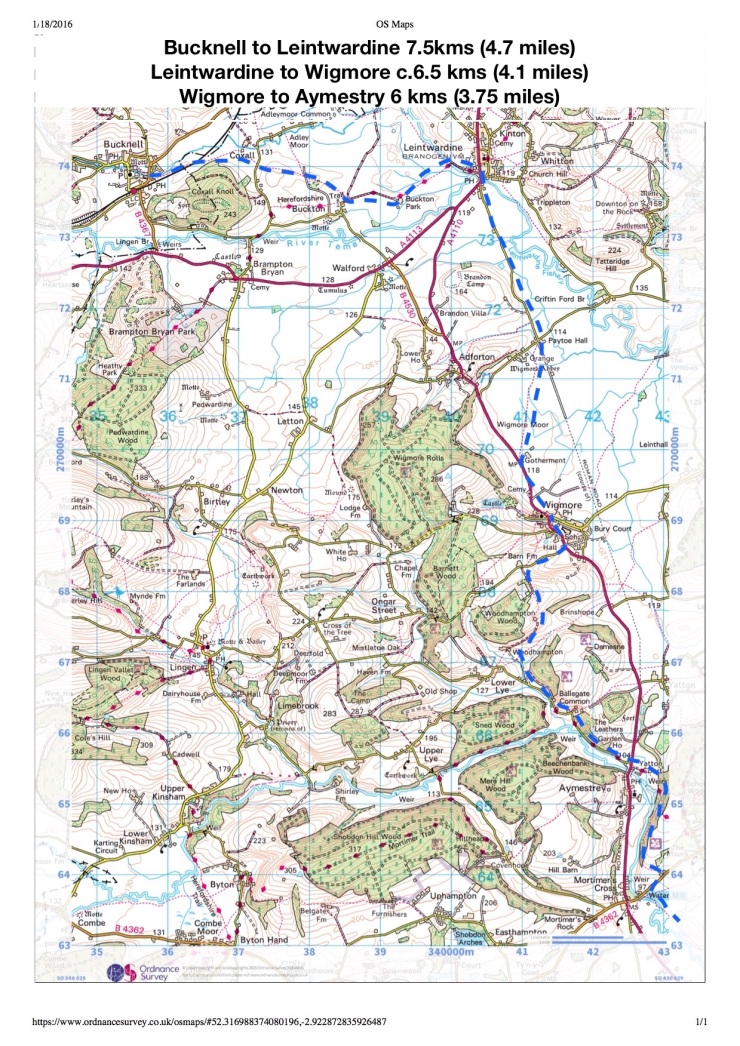 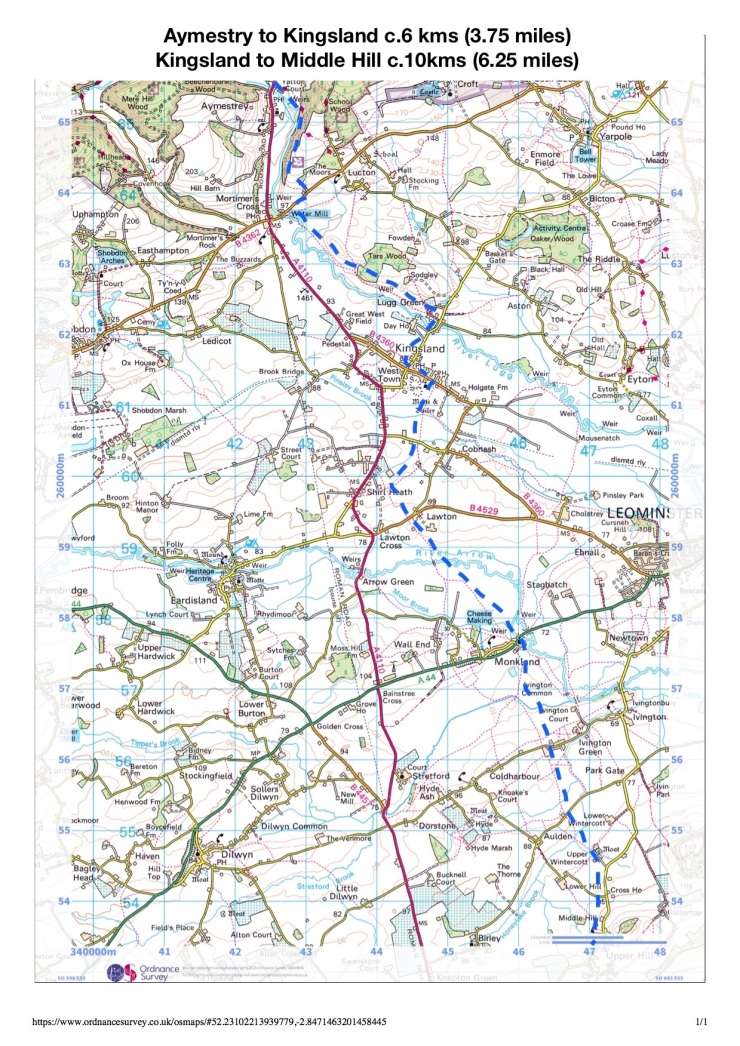 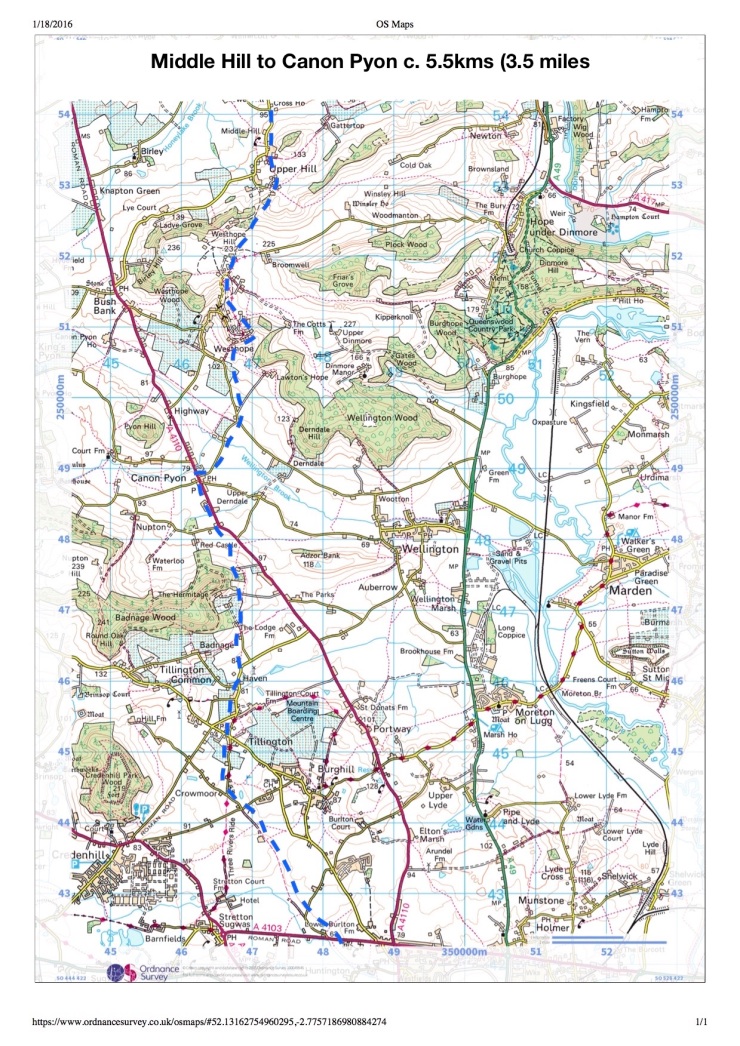 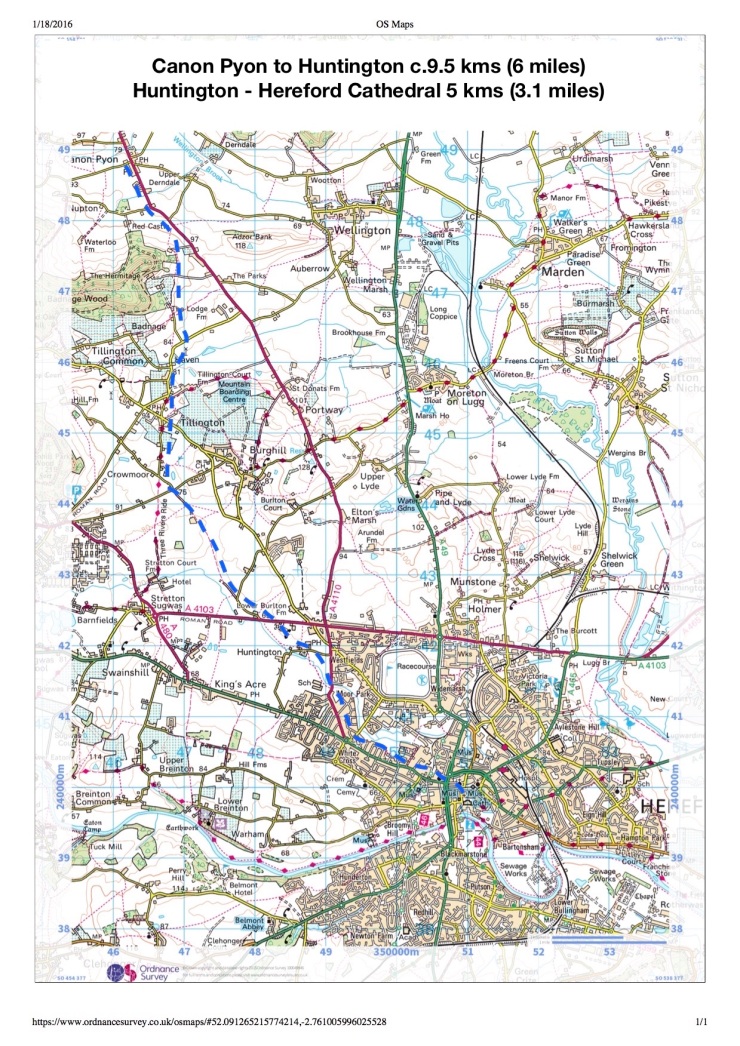