Whilst working on the Common Ground Project members of Pathways discovered, through casual conversation & to their considerable surprise, that in the area around Bishop’s Castle (having a population of approximately 2500 people) there were over 30 separate nationalities represented. Not necessarily first generation newcomers to Britain but all people whose personal identity involved somewhere other than the UK.

Consequently and as a way of providing an opportunity for this rich cultural diversity to be more widely known and appreciated within the locality, it was decided to create material for exhibition at the Bishop’s Castle Arts Festival in February 2014.

The start of this process was to invite guests (many of whom have lived, worked and socialised in the area for many years) to a social evening held at the 6 Bells Pub

The evening began with home made soup, followed by two craft sessions.

The first involved learning the basics of Corn Dolly construction led by Bernard Edwards an expert in the craft. 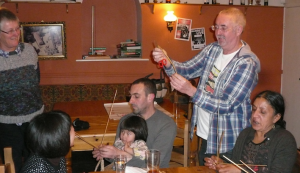 After the creation of ‘dollies’ Catherine, regular leader of ‘Garland Workshops’ explained the creative process to the group. 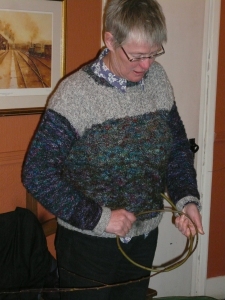 Who then worked away at a variety of  straw weavings & completed garlands. 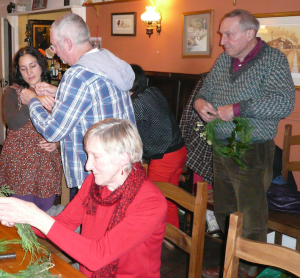 The activity raised questions about the origin and purpose of ‘corn dollies’  or ‘harvest trophies’.

As with many folk customs revived in the C20th there is an inclination, in an Age where traditional religion has limited appeal, to describe received customs through inspirational conjecture as magical or ‘religious’ action, ignoring the simple fact that celebrating a harvest is, as with any other important life event, a natural human activity. The following link provides a good example: the ‘grape stomp’ at  the Sonoma County Harvest Fair.
The appeal to ancient tradition is also natural
– as the marketing image for this (38 yr old)  fair illustrates.

THE FEAST OF THE INGATHERING
Wherever, throughout the earth, there is such a thing as a formal harvest, there also appears an inclination to mark it with a festive celebration. The wonder, … that, once more, as it has ever been, the ripening of a few varieties of grass has furnished food for earth’s teeming millions, insure that there should every where be some sort of feast of ingathering.
In England, this festival passes generally under the endeared name of Harvest-Home. In Scotland, where that term is unknown, the festival is hailed under the name of the Kirn In the north of England, its ordinary designation is the Mell-Supper. And there are perhaps other local names. But every where there is a thankful joy, a feeling which pervades all ranks and conditions of the rural people, and for once in the year brings all upon a level.

The evening continued with wide ranging discussion and consideration of activities that would produce material for the forthcoming Arts Festival. 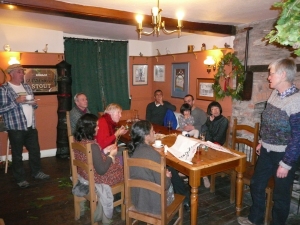 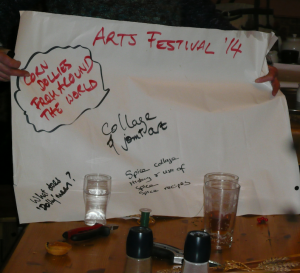 An exploration of the use of Garlands and ‘Corn dolly’ trophies across cultures may be developed.

The programme for the Arts Festival runs throughout the event.