Pathways assisted the Common Ground partnership with an initial workshop (September 2012) held during the first partnership meeting on the use of creative methodologies for evaluation processes.

The participants were asked, at the start of the meeting, to make a random collection of ‘found’ items that had, for them, a particular meaning relating to the visits and activities in which they shared.

On the second day these items were brought to a workshop session and together, all the participants created a single work of art that represented the whole group. During the assembly process the group were able to share their ‘found items’ and also engage directly with each other in negotiating the ‘Common Ground’ Artwork.

The resulting artwork was then placed in the local parish Church where it became a feature during the local Harvest Festival and remained on display for over a month as a symbol and reminder of the international meeting held in the locality. 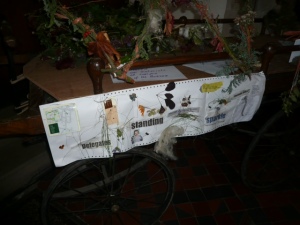 Following the first partnership meeting in September 2012, the partners were asked to complete

an online evaluation of the meeting

The form requested personal comments – and certain patterns could thus be identified. One was that there was too much ‘sightseeing’ and that the use of cars and mini-buses (the only means of accessing the local countryside) was excessive.

These points, not always easy for organisers to ‘hear’, demonstrate the value of informal ‘formative’ evaluation processes. For those who have to constantly use cars even for short journeys (in, for example, hilly rural areas lacking public transports and easy cycle trails) it is not easy to understand how a largely urban & public transport served visitor may feel about regular ‘car-hopping’.

Further, we are all, wherever we are based, are inclined to be enthusiastic – and at times over-enthusiastic – regarding introducing visitors to the delights of our locality & the activities with which we personally engage.

Thus sometimes there is  a failure to grasp that visitors, especially those using a foreign language (in this case, English), need space and time to observe, absorb & then be allowed to comment on, new experiences. Further, some people take longer than others to adjust – and some may never adjust to the ‘context’ into which they have found themselves.

The evaluation results had an impact on the local organisers. There was considerable discussion about the ways in which visiting groups could be managed in a way that provided maximum benefit for all involved. The local organisers have therefore endeavoured to improve the above particular aspects when providing  similar activities that have occurred since 2012.

The changes resulted in greater consultation with partners & visitors before meetings regarding their desires and requirements & a reduction in the ‘car-hopping’ aspects. Where such ‘hopping’ is likely to occur, visitors are now better advised prior to the meeting (however more recent experience suggests that, even with careful explanation, the nature of travel to & in and around the rural area in which Pathways is based, is frequently not understood until experienced).

In late 2013 the partners were asked, by a Google Form, to outline their approaches to evaluation techniques.

Only 3 (of 8) partners responded. The conclusion, amongst Pathways staff was that the reason for the low responses was due to a basic lack of understanding of the purposes of evaluation – most partners still viewing evaluation as a means of judging and grading work, rather than being an essential element that assists the progress & development of any proposed action.

However, such a judgement may be a simple defensive reaction. It is difficult, without engaging in detailed discussion and analysis with those who did not respond, to know why they failed to respond. Each failure may have its own discrete reason & it could be that the developer of the evaluation process (Pathways) had completely misjudged the varied contexts which include e.g. previous & existing experience, language skills etc & had not made allowance for the situation. It could also be that partners simply needed reminding to complete the form (such reminder being accompanied by offer of support).

The results may be viewed at